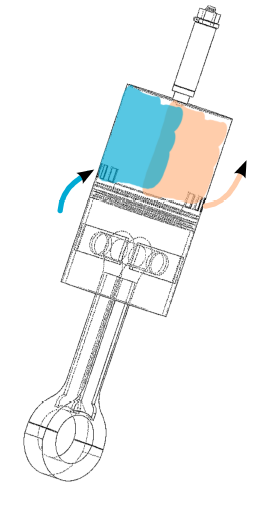 In general, four principal operations are needed to make a Diesel engine works.

How does a two stroke Diesel engine work?

How does two stroke Diesel engine work is actually simple. As it can be seen in the figure (a) below, as the piston is moving toward the BDC, the intake and the exhaust are taking place simultaneously, or almost as it can be the case in some configurations where the inlet ports are set at a lower horizontal level compared to the exhaust ports. This process is known as scavenging, where the intake air expels the exhaust gas and fills up the cylinder with fresh air. The piston is then moving up (see figure (b) below), the ports are covered by the piston skirt and the compression takes place. At the end of the compression (toward TDC), a fuel injection is performed (see figure (c) below). The elevated temperature at the end of compression provokes an instantaneous combustion of the injected fuel. The energy released from the combustion, which can be assimilated to a small explosion, pushes the piston down toward the BDC (see figure (d) below). As the piston reaches the ports level position, one closed cycle is finished. Repeating this cycle will keep the engine in a running state. As you can notice, in case of two stroke engines, the four principal operations mentioned at the beginning are performed within two strokes.

How does a four stroke Diesel engine work?

The four stroke engines however achieve the four principal operations (Intake, compression, expansion and exhaust), mentioned at the beginning of the article, within four strokes (two rounds of the crankshaft). This is how four stroke Diesel engines work. The inlet valves open during the piston movement toward BDC and the air fills up the cylinder (see figure (b) below). The maximum fill-up of the cylinder is reached as the piston arrives to the BDC. At this moment, the inlet valve closes and the compression starts up, as the cylinder moves up toward the TDC (see figure (c) below). As the piston reaches the TDC, the fuel is injected into the cylinder (see figure (d) below). As already mentioned before, at the end of the compression, the temperature becomes high enough to ignite automatically the injected fuel. The energy released by the combustion is converted to a thermodynamic work, by which the piston is pushed down toward the BDC (see figure (e) below). The piston movement is transmitted to the crankshaft via the connecting rod. Please note that these three elements transform the alternative movement of the piston to a circular movement of the crankshaft. The last step before completing the cycle is the exhaust of gases. The exhaust valves open as the piston reaches the BDC and the movement of the piston toward the TDC allows expelling of the exhaust gases. The cycle is repeated to maintain the engine in operation state. In case of multi-cylinder configuration, a phase shift between the cycles of cylinder is performed to allow a smooth rotation of the crankshaft.

Still have questions without answers or comments? Write them down!
We would be glad to help you Cancel reply